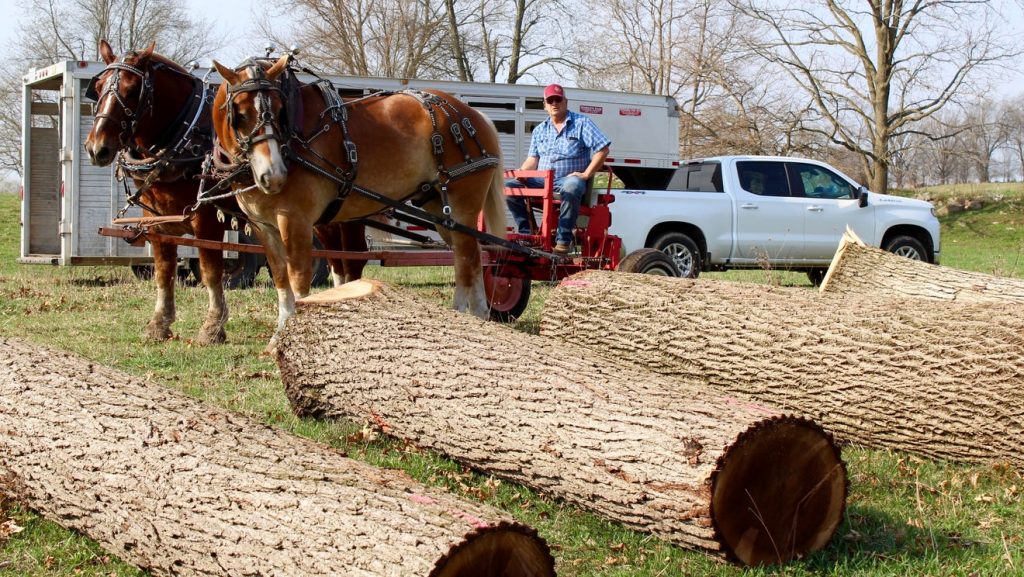 Using an unusually warm spring day to work his horses, Tom Brown, of Litchfield, logged a woods off of Ball Road with a dual purpose in mind.

Brown, 53, was busy clearing walnut and white oak trees from the property Thursday morning while working his “green pair” of draft horses named Pete and Rock.

“It’s what we do professionally and for the St. Jude’s kids,” Brown said.

He began logging at the age of 15, about the same time he began pulling draft horses.

Logging allows Brown to combine the two passions, but he also has a special place in his heart for St. Jude’s kids, who benefit from funds raised during pulling competitions. While logging utilizes the horses’ muscle and is a good way to get the horses in shape for pulling season, it also benefits the kids in funds raised, he explained.

As he struggled to get the horses to mind his commands, Brown said it takes effort to use horses for logging, but it also saves the land because the horses don’t damage the woods like machinery does.

“It’s a little extra work to use the horses, but it gets them in shape,” he said. “They’re like athletes – you have to stay with them and train every day.”

After attaching a jaw to a 6,000 pound log, Brown steered the draft horses as they forged ahead, dragging the log to a clearing.

Brown, who grew up watching his father compete in pony pulls around the state, has been pulling lightweight and heavyweight horses for nearly 40 years. He and his family compete in 40 to 50 pulls a year.

Each year, Brown looks forward to the first of the year, when the pulling season begins in Florida.

“I leave the first part of January and come back the end of February,” he said.

Brown said that last year he was still able to compete in Indiana. He outgrew holding such events at his place locally and likes working with the Southern Draft Association.

Currently, plans are underway for the eighth annual Pulling for St. Jude’s Kids benefit horse and pony pull, which will be held at the Topeka, Indiana Sale Barn. This year’s pull will be at 10 a.m. May 1.

Brown said he is expecting more teams this year as the event continues to grow. Despite the pandemic, last year’s pull raised $33,000.

Brown said many don’t realize what St. Jude’s Children’s Hospital does for families with sick children. The children’s hospital leads the way the world understands, treats and defeats childhood cancer and other life-threatening diseases. Families never receive a bill from St. Jude for treatment, travel, housing or food.

“They are phenomenal,” he said. “I’ve got a buddy they helped and they even wrote him a check since he wasn’t able to work while his kid was there.”