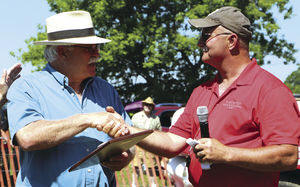 In 1967, a young man took a trip with his father from Cottage Grove to Waverly, Iowa, to attend a horse auction. He ended up bringing back a Strawberry Roan Belgian named Jack. They later acquired another Belgian horse named Banner. With these two horses, he competed in his first-ever horse pull event – at the Cottage Grove Firemen’s Festival. The team of Jack and Banner ended up placing third that day. Although Dale Huston did not win that day, the event ignited a love of horses and competition that would last a lifetime.

On Sunday morning – once again at the Cottage Grove Firemen’s Festival – Huston was presented with a plaque noting his induction into the Wisconsin Horse Pullers Association Hall of Fame.

“Through the years, Dale discovered a few keys to success,” said Scott Skinkis of the WHPA. “Dale learned that horses were athletes and that they needed to be treated that way in order to get the best out of them. With proper nutrition, training and care, he could get their maximum performance on game days just like pro athletes.

“Along with good horses, Dale also learned early that it was important to surround himself with good people and good equipment. He always started with the basics and made sure things were cleaned, spotless and shined.”

With these few philosophies, Huston went on to win numerous horse pulling contests throughout Wisconsin, including five years in a row at the Wisconsin State Fair.

He and his horses, along with his support team, went on to win many events throughout the country, including events in New York, Florida, Colorado, Ohio, Montana, Minnesota, Illinois, Michigan and South Dakota.

While most people would sit back and relax after such a successful horse pulling career, Huston wasn’t one of them.

“Dale’s love of horses and competition led to another chapter in his life – six horse hitch teams,” Skinkis said. “Dale teamed up with Nelson Schrock, formerly with the famous Budweiser Clydesdales, and between the two of them, they built a world champion Belgian six horse hitch team.”

The newest chapter of Huston’s horse career involves Dutch harness horses, competing with his team at an event in Lexington, Ky., where he was an event winner.

“Dale has been a great ambassador for the Wisconsin horse community,” Skinkis said. “Dale has taken his passion for horses to a level that many people strive for but few ever achieve. Through the help of his family and many friends, Dale has compiled a legacy of excellence that has not seen its final chapter, but when the final chapter is completed, it will not be forgotten.”

Article Courtesy of the Herald-Independent